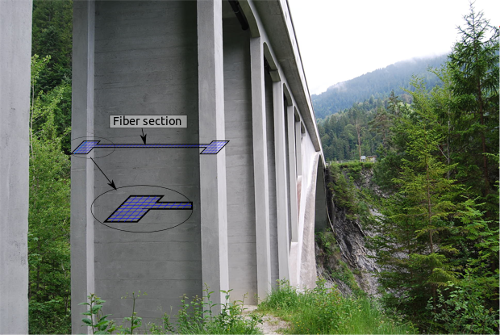 XC tutorial 3. Properties of a reinforced concrete section obtained from a fiber-section model.

The analysis of cross-sections by means of fiber models is based on their discretization in a series of point elements or fibers. Each fiber is characterized by the location of its center of gravity, a tributary area and its material's strain-stress curve. The constitutive relation of the section is derived by integration of the response of all the fibers. The only assumption is that plane sections remain plane and normal to the longitudinal axis during the element deformation.

- Large capacity and versatility for reproducing complex geometry and material combinations, which makes it appropriate to deal with arbitrary shaped sections and any material behavior.

- Fiber stress-strain relations are typically expressed as explicit functions of strain, not needing to split them in polynomial segments, cumbersome to deal with.

- It is adequate to perform nonlinear inelastic analysis; the nonlinear behavior of the elements derives entirely from the nonlinear stress-strain relation of the materials.

This tutorial deals with a simple RC rectangular section subjected to uniaxial bending. Two layers of reinforcing bars are placed at the top and bottom faces. By integration over the fibers, we obtain geometrical and mechanical properties of the section as well as its deformation under load. [pdf] Read the tutorial 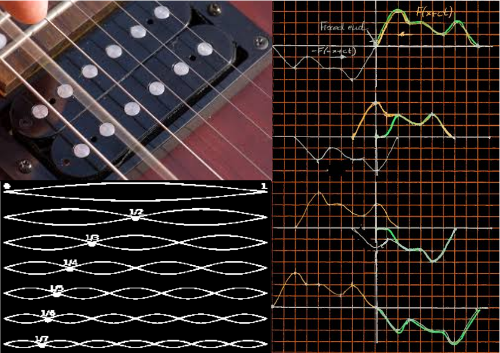 XC tutorial 2. Analysis of a vibrating string under tension.

Any motion of a linear system can be resolved into a superposition of modes, combined with appropriate amplitudes and phases. Modes are a special pattern of motions that have the property that at any point the object moves perfectly sinusoidally and that all points move at the same frequency (if conditions, e.g. stiffness, boundaries, . . . , do not change in time).

This XC-tutorial deals with a flexible string fixed at the ends and stretched to an initial strain. The aim is to determine the first three natural frequencies of lateral vibration of the stretched string.

The case is approached by a two-dimensional FE model, with three DOF per node. An elastic uniaxial material is defined to reproduce the cable behavior, whose strain-stress relationship ranges from slack (large strain at zero stress) to taught (linear with constant elastic modulus). The model is meshed with elements of type co-rotational truss, that can handle large displacements and rotations at the global level (rigid body motion), while at the local level only strain producing deformations along the x-axis of the element remains.

A static solution is firstly obtained and all the components of the analysis (constraint handler, DOF numberer, solution algorithm, integrator, etc. ) detailed in the tutorial. Finally, a modal analysis is performed in order to get the first three eigenvalues.

Getting started with XC. Axial force in a bar subjected to a uniform temperature increase.

This tutorial deals with a steel bar of uniform cross section whose ends are fixed from translational motion. The goal is to find the axial force in the bar subjected to a uniform temperature increase . 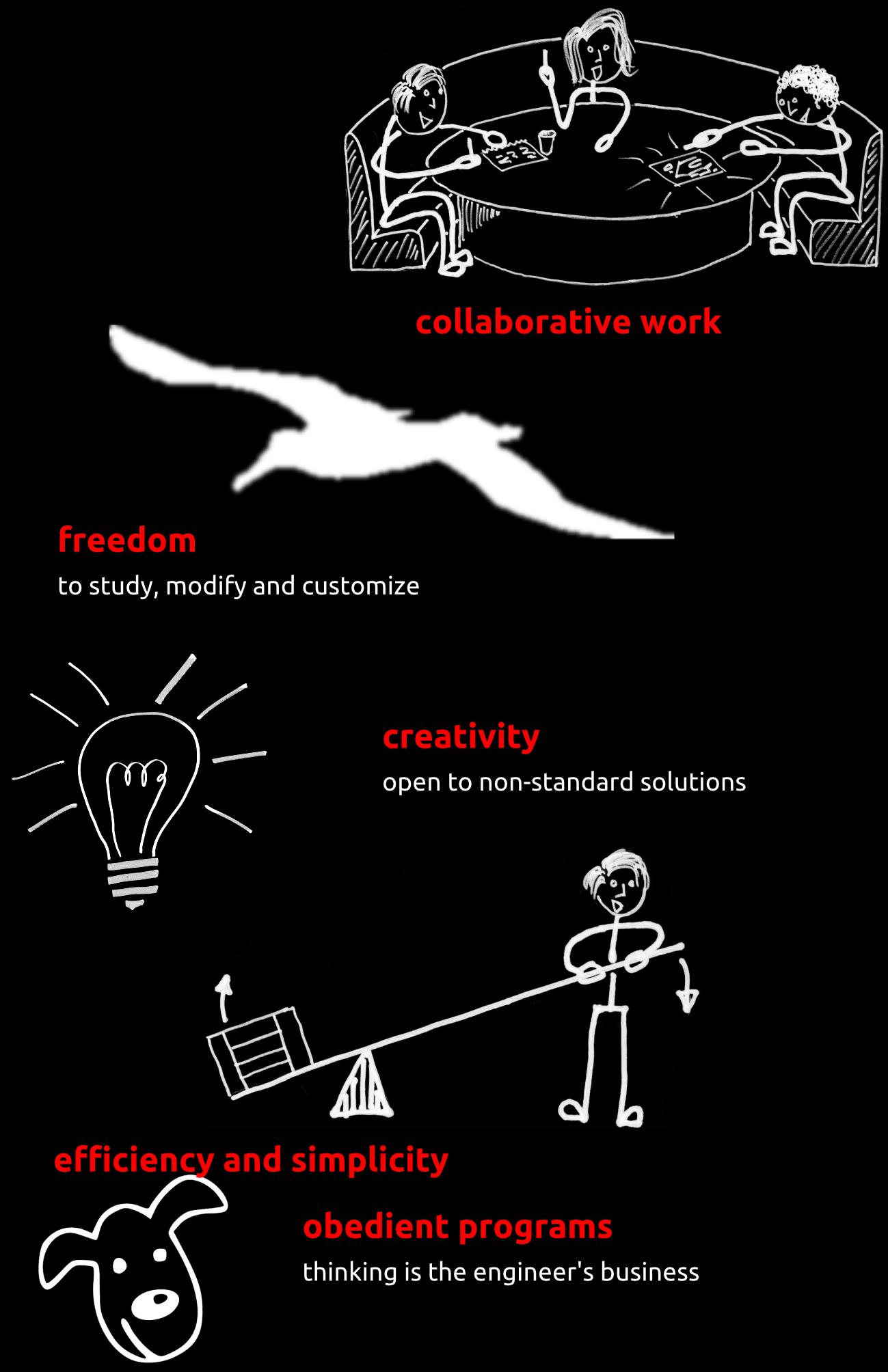 We have undertaken to begin posting a series of tutorials on the XC software in order to pave the way for those who want to join the project.

Motivation.- Our main motivation is to create an open, powerful, robust and flexible tool, which gives the users a great control over the calculation process, since they can freely study, modify, and customize it to fit their needs, and, of course, contribute to the community with their own developments. Inspiration.- The growth of free software is exponential, which has given rise to communities as powerful as Linux, LibreOffice or Mozilla. On a smaller scale, one of the free software projects from which we often seek inspiration is FreeCAD, a parametric 3D modeling CAD that began in 2001 and has an active community of collaborators that currently works, inter alia, in the development of a BIM for the program. Where are we?.- XC incorporates OpenSees kernel as its FE calculation engine. As is common in finite element programs, XC has modeling tools (2D and 3D geometry entities, boolean operations, cable modeling, automatic meshing, selecting tools, ...), loads and boundary conditions, linear and non-linear structural analysis, generation of combinations, verification of limit states according to different standards, postprocessing tools, ... Where do we want to drive the development?.- Wherever the collaborative network wants: form finding, IFC structural, sophisticated prestressing analysis, fire engineering,... XC is not a one-way program, its growth depends on the enhancements and new features that the developer community incorporates. 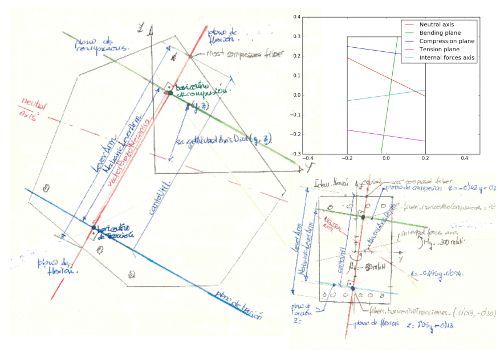 Tangled up with fibers

These days we are playing with XC fiber-material models of reinforced concrete sections. By integrating different fiber properties, we can find useful things, like: 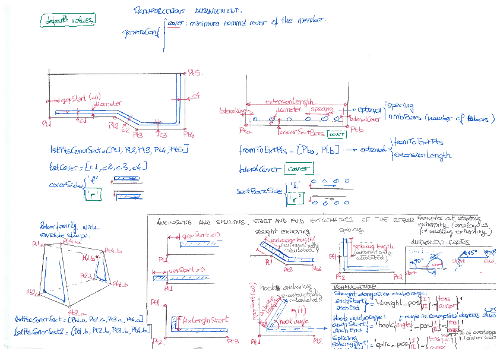 FreeCAD comes in handy for the tedious task of creating reinforcement drawings including the steel schedule.

We have written a rebar-family class in Python that handles the drawing of the rebar shape within the various sections of a reinforced concrete member and finally shows its properties in a steel schedule. It tackles in a simple way the drawing of hooks and splices, calculating automatically the anchoring lengths. 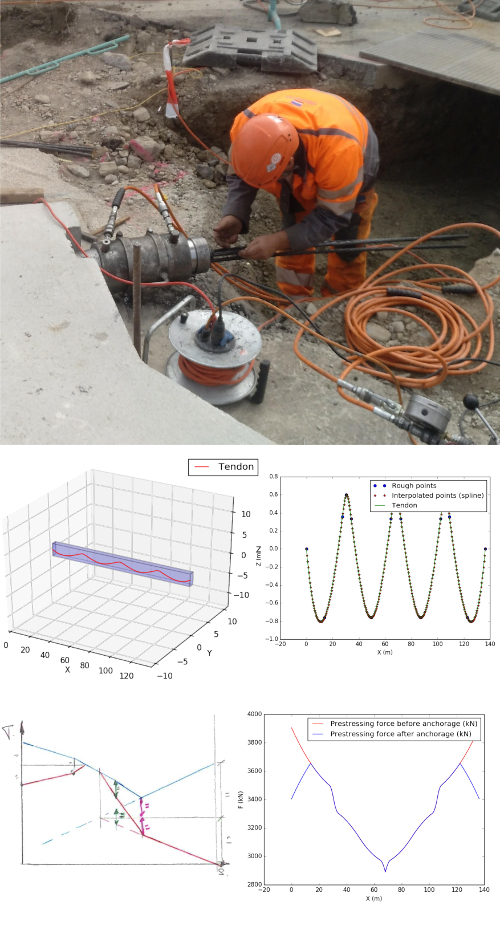 Analysis of prestressed concrete structures with XC. Part I.- Immediate losses in prestress.

This article deals with the procedure for implementing the analysis of prestressed concrete structures in XC. In particular, immediate losses of prestressing are considered, which include those due to friction at the tendon-concrete interface, to the slip of anchorages at the ends of the cable as well as the originated by the elastic shortening of concrete.

The geometry of the curved cables is interpolated from some characteristic points by using cubic splines, which allows to easily obtaining the curvilinear coordinate and its first derivative, required to evaluate the cumulated angular deviation involved in the prestressing loss due to friction.

In order to enhance freedom when tracing the cables, nodes of tendon and those of concrete elements don't need to be coincident in space, instead, kinematic conditions are created between them to provide perfect adhesion.

Once the spline that adjusts the cable is obtained, the calculation of loss due to friction is straightforward.

To calculate the loss due to anchorage slip we must solve a problem with to unknowns into a single equation, for which an iterative method is used, by means of the Newton-Krylov solver implemented in the Scipy library.